The older prisoner health and social care assessment and plan (OHSCAP) versus treatment as usual: a randomised controlled 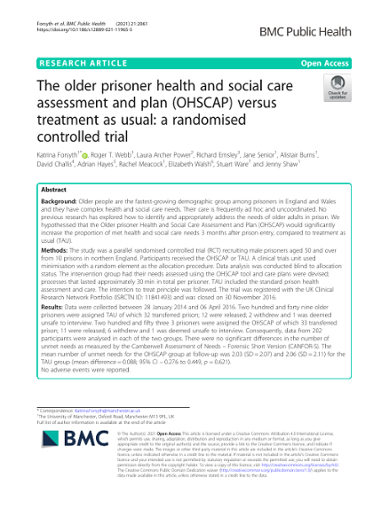 Background: Older people are the fastest-growing demographic group among prisoners in England and Wales and they have complex health and social care needs. Their care is frequently ad hoc and uncoordinated. No previous research has explored how to identify and appropriately address the needs of older adults in prison. We hypothesised that the Older prisoner Health and Social Care Assessment and Plan (OHSCAP) would significantly increase the proportion of met health and social care needs 3 months after prison entry, compared to treatment as usual (TAU). Methods: The study was a parallel randomised controlled trial (RCT) recruiting male prisoners aged 50 and over from 10 prisons in northern England. Participants received the OHSCAP or TAU. A clinical trials unit used minimisation with a random element as the allocation procedure. Data analysis was conducted blind to allocation status. The intervention group had their needs assessed using the OHSCAP tool and care plans were devised; processes that lasted approximately 30 min in total per prisoner. TAU included the standard prison health assessment and care. The intention to treat principle was followed. The trial was registered with the UK Clinical Research Network Portfolio (ISRCTN ID: 11841493) and was closed on 30 November 2016. Results: Data were collected between 28 January 2014 and 06 April 2016. Two hundred and forty nine older prisoners were assigned TAU of which 32 transferred prison; 12 were released; 2 withdrew and 1 was deemed unsafe to interview. Two hundred and fifty three 3 prisoners were assigned the OHSCAP of which 33 transferred prison; 11 were released; 6 withdrew and 1 was deemed unsafe to interview. Consequently, data from 202 participants were analysed in each of the two groups. There were no significant differences in the number of unmet needs as measured by the Camberwell Assessment of Needs – Forensic Short Version (CANFOR-S). The mean number of unmet needs for the OHSCAP group at follow-up was 2.03 (SD = 2.07) and 2.06 (SD = 2.11) for the TAU group (mean difference = 0.088; 95% CI − 0.276 to 0.449, p = 0.621). No adverse events were reported. Conclusion: The OHSCAP was fundamentally not implemented as planned, partly due to the national prison staffing crisis that ensued during the study period. Therefore, those receiving the OHSCAP did not experience improved outcomes compared to those who received TAU.

Open Access This article is licensed under a Creative Commons Attribution 4.0 International License, which permits use, sharing, adaptation, distribution and reproduction in any medium or format, as long as you give appropriate credit to the original author(s) and the source, provide a link to the Creative Commons licence, and indicate if changes were made. The images or other third party material in this article are included in the article's Creative Commons licence, unless indicated otherwise in a credit line to the material. If material is not included in the article's Creative Commons licence and your intended use is not permitted by statutory regulation or exceeds the permitted use, you will need to obtain permission directly from the copyright holder. To view a copy of this licence, visit http://creativecommons.org/licenses/by/4.0/. The Creative Commons Public Domain Dedication waiver (http://creativecommons.org/publicdomain/zero/1.0/) applies to the data made available in this article, unless otherwise stated in a credit line to the data.