Variation in human herpesvirus 6B telomeric integration, excision, and transmission between tissues and individuals 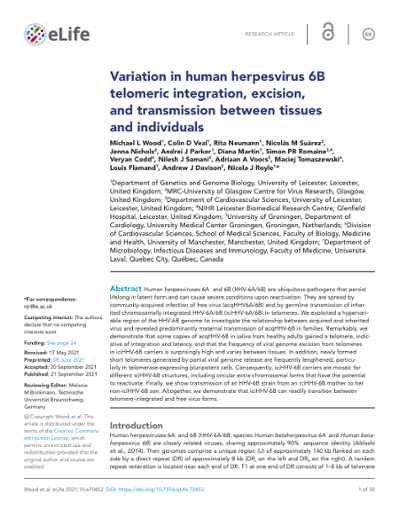 Human herpesviruses 6A and 6B (HHV-6A/6B) are ubiquitous pathogens that persist lifelong in latent form and can cause severe conditions upon reactivation. They are spread by community-acquired infection of free virus (acqHHV6A/6B) and by germline transmission of inherited chromosomally integrated HHV-6A/6B (iciHHV-6A/6B) in telomeres. We exploited a hypervariable region of the HHV-6B genome to investigate the relationship between acquired and inherited virus and revealed predominantly maternal transmission of acqHHV-6B in families. Remarkably, we demonstrate that some copies of acqHHV-6B in saliva from healthy adults gained a telomere, indicative of integration and latency, and that the frequency of viral genome excision from telomeres in iciHHV-6B carriers is surprisingly high and varies between tissues. In addition, newly formed short telomeres generated by partial viral genome release are frequently lengthened, particularly in telomerase-expressing pluripotent cells. Consequently, iciHHV-6B carriers are mosaic for different iciHHV-6B structures, including circular extra-chromosomal forms that have the potential to reactivate. Finally, we show transmission of an HHV-6B strain from an iciHHV-6B mother to her non-iciHHV-6B son. Altogether, we demonstrate that iciHHV-6B can readily transition between telomere-integrated and free virus forms.