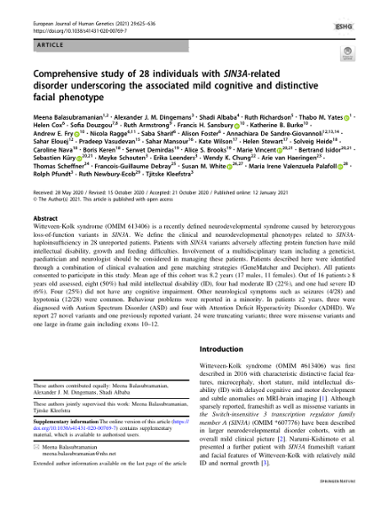 Witteveen-Kolk syndrome (OMIM 613406) is a recently defined neurodevelopmental syndrome caused by heterozygous loss-of-function variants in SIN3A. We define the clinical and neurodevelopmental phenotypes related to SIN3A-haploinsufficiency in 28 unreported patients. Patients with SIN3A variants adversely affecting protein function have mild intellectual disability, growth and feeding difficulties. Involvement of a multidisciplinary team including a geneticist, paediatrician and neurologist should be considered in managing these patients. Patients described here were identified through a combination of clinical evaluation and gene matching strategies (GeneMatcher and Decipher). All patients consented to participate in this study. Mean age of this cohort was 8.2 years (17 males, 11 females). Out of 16 patients ≥ 8 years old assessed, eight (50%) had mild intellectual disability (ID), four had moderate ID (22%), and one had severe ID (6%). Four (25%) did not have any cognitive impairment. Other neurological symptoms such as seizures (4/28) and hypotonia (12/28) were common. Behaviour problems were reported in a minority. In patients ≥2 years, three were diagnosed with Autism Spectrum Disorder (ASD) and four with Attention Deficit Hyperactivity Disorder (ADHD). We report 27 novel variants and one previously reported variant. 24 were truncating variants; three were missense variants and one large in-frame gain including exons 10-12.