Virtual reality (VR) therapy for patients with psychosis: satisfaction and side effects 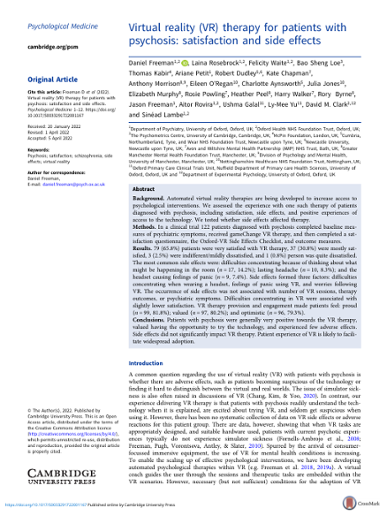 BACKGROUNDAutomated virtual reality therapies are being developed to increase access to psychological interventions. We assessed the experience with one such therapy of patients diagnosed with psychosis, including satisfaction, side effects, and positive experiences of access to the technology. We tested whether side effects affected therapy.METHODSIn a clinical trial 122 patients diagnosed with psychosis completed baseline measures of psychiatric symptoms, received gameChange VR therapy, and then completed a satisfaction questionnaire, the Oxford-VR Side Effects Checklist, and outcome measures.RESULTS79 (65.8%) patients were very satisfied with VR therapy, 37 (30.8%) were mostly satisfied, 3 (2.5%) were indifferent/mildly dissatisfied, and 1 (0.8%) person was quite dissatisfied. The most common side effects were: difficulties concentrating because of thinking about what might be happening in the room (n = 17, 14.2%); lasting headache (n = 10, 8.3%); and the headset causing feelings of panic (n = 9, 7.4%). Side effects formed three factors: difficulties concentrating when wearing a headset, feelings of panic using VR, and worries following VR. The occurrence of side effects was not associated with number of VR sessions, therapy outcomes, or psychiatric symptoms. Difficulties concentrating in VR were associated with slightly lower satisfaction. VR therapy provision and engagement made patients feel: proud (n = 99, 81.8%); valued (n = 97, 80.2%); and optimistic (n = 96, 79.3%).CONCLUSIONSPatients with psychosis were generally very positive towards the VR therapy, valued having the opportunity to try the technology, and experienced few adverse effects. Side effects did not significantly impact VR therapy. Patient experience of VR is likely to facilitate widespread adoption.