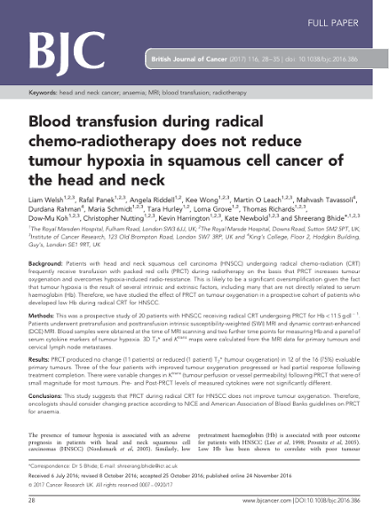 BACKGROUND: Patients with head and neck squamous cell carcinoma (HNSCC) undergoing radical chemo-radiation (CRT) frequently receive transfusion with packed red cells (PRCT) during radiotherapy on the basis that PRCT increases tumour oxygenation and overcomes hypoxia-induced radio-resistance. This is likely to be a significant oversimplification given the fact that tumour hypoxia is the result of several intrinsic and extrinsic factors, including many that are not directly related to serum haemoglobin (Hb). Therefore, we have studied the effect of PRCT on tumour oxygenation in a prospective cohort of patients who developed low Hb during radical CRT for HNSCC., METHODS: This was a prospective study of 20 patients with HNSCC receiving radical CRT undergoing PRCT for Hb<11.5 g dl-1. Patients underwent pretransfusion and posttransfusion intrinsic susceptibility-weighted (SWI) MRI and dynamic contrast-enhanced (DCE) MRI. Blood samples were obtained at the time of MRI scanning and two further time points for measuring Hb and a panel of serum cytokine markers of tumour hypoxia. 3D T2* and Ktrans maps were calculated from the MRI data for primary tumours and cervical lymph node metastases., RESULTS: PRCT produced no change (11 patients) or reduced (1 patient) T2* (tumour oxygenation) in 12 of the 16 (75%) evaluable primary tumours. Three of the four patients with improved tumour oxygenation progressed or had partial response following treatment completion. There were variable changes in Ktrans (tumour perfusion or vessel permeability) following PRCT that were of small magnitude for most tumours. Pre- and Post-PRCT levels of measured cytokines were not significantly different., CONCLUSIONS: This study suggests that PRCT during radical CRT for HNSCC does not improve tumour oxygenation. Therefore, oncologists should consider changing practice according to NICE and American Association of Blood Banks guidelines on PRCT for anaemia.